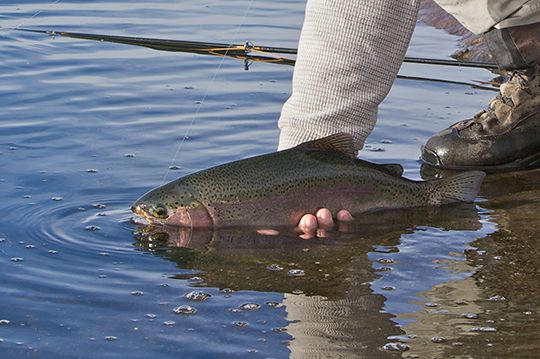 Vrederus offers outstanding fly fishing in the lake in front of the cottages with two motorised boats available, in the dams & pristine mountain streams, and in the many rivers in the area. A rod fee of R100 is levied.

Naudé's Lake was first stocked in July 1994 and has been continuously stocked by Danish strain rainbow trout and a limited number of brown trout. Phenomenal growth over the years can best describe how these trout have fared, with 8 pounders regularly being taken. (There has never been any artificial feeding in the dams.)

The lake is uniquely shallow, spring fed and clear, lying in a flat basin at about 2000m. Because of its high location, the water is cold all year round, and being shallow, it has a varied tapestry of weed beds, grassy islands, inlets, bays and anything else any stillwater angler's heart could hope for.

The shallowness of the water also makes for abundant insect life and with that, improved conditions for the trout. But make no mistake, the trout in these dams can become very selective in eating, testing one’s skill and patience. This is not a put-and-take fishery!

Naudé's Lake can be fished from the bank, waded or float-tubed. Two small battery-powered boats are available from the Naudés, who make sure that it is charged every day when used.

This is a relatively small body of water, which has developed from the overflow of Naudé’s Lake. Here novices and youngsters can be guaranteed the promise of landing a few trout at sunrise or sunset on a dry fly while casting up the edge of the weed banks.

Vrederus makes a nice focal point for fishing in the Maclear/Rhodes area because you have access to streams like the Hawerspruit, the Antelope, the Tsitsa, the upper Luzi and the famous Boardman’s Chase section on the upper Bell river. That is quite a menu. 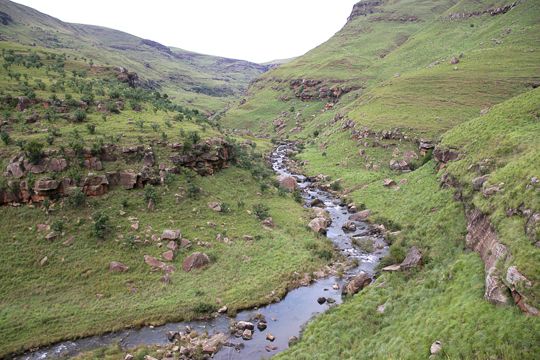 Catch and release and the use of barbless hooks are strictly practised in all areas of the North-Eastern-Cape. The fly fisherman exploring the water of this area finds such a wealth of trout – so much river, stream and dam – that one could spend a lifetime of fly fishing without going to the same water twice. The fly fisherman needs to be as much hunter as human, for the trout are wild and very alert.